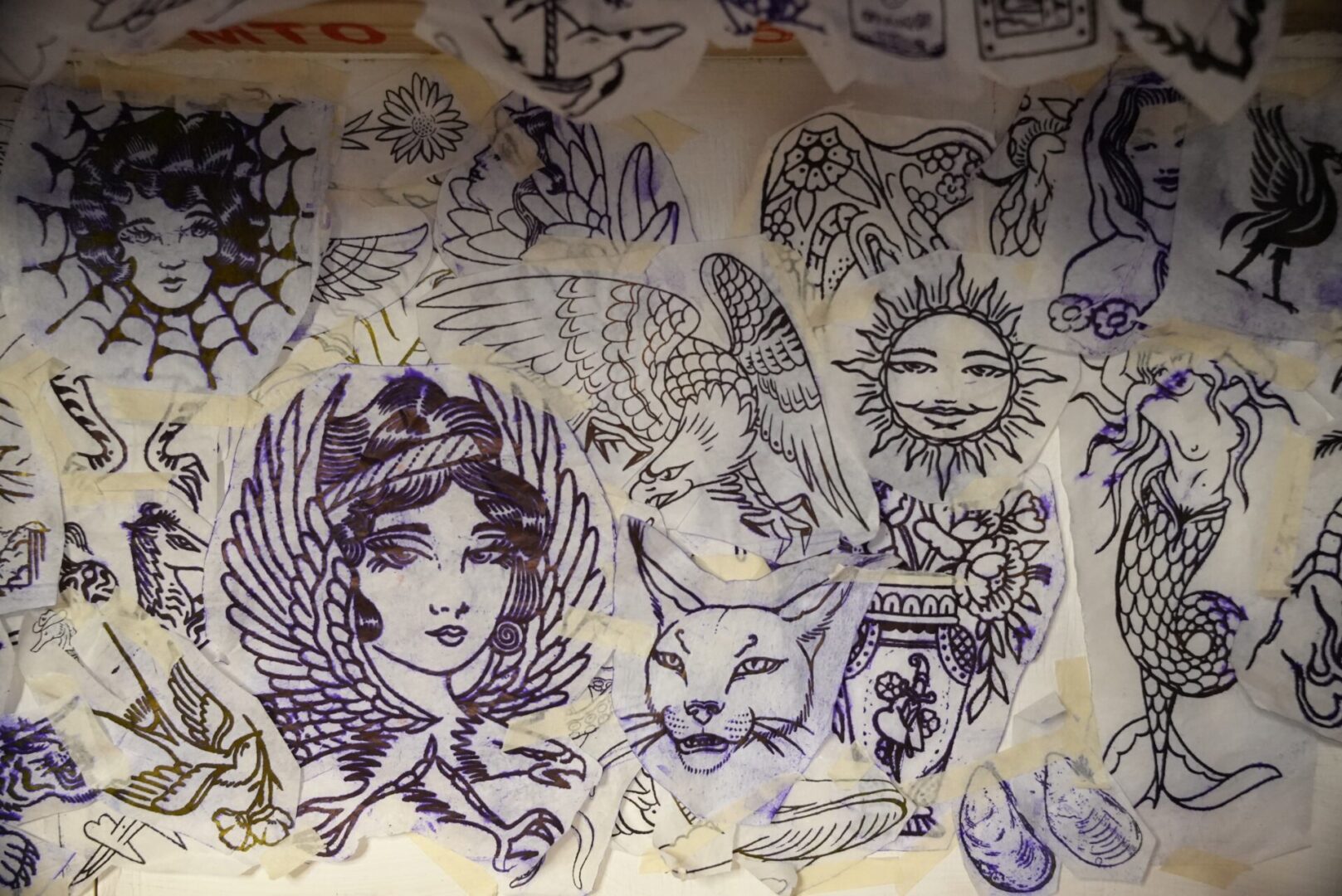 By Gulshan Pirie StodelJun 8, 2022No Comments

Walking into the Slow Life Studio was an experience of its own, the vibrance of the shop works perfectly to exhibit the ideas behind “slow life” as the relaxed and charming space it is. Founded by Mettie Elliot in April, the studio is situated in between the waves of Kalk Bay Reef, a blooming nursery and the hustle and bustle of the picturesque tourist town, Kalk Bay. The Slow Life tat-shack has a peaceful atmosphere, decorated with plenty of artworks all handmade by Mettie. The space is truly a contrast to the general standard of dark and grungy tattoo shops, making it the perfect spot for a group of friends to come and chill out while they let Mettie work his magic with his trusty tattoo gun.

Mettie is a curious, expressive 28 year old tattoo artist, who grew up in the small surfer’s village – Kommetjie from the age of 2. He spent most of his childhood outdoors where he could do any and all of the adventures his heart desired. It was here that Mettie first began exploring his love of art, drawing all kinds of unique designs on his surfboards. Mettie recounts tattoo inspiration as hard to find as a youngster due to the shelter South Africa has around these types of artforms.

Which begs the question of how do we change that outdated narrative? Art is an all encompassing headline. We see art all around us in many different forms, whether we realise it or not. To exclude tattoos from the genre of art would be grossly ignorant. Looking at the process tattoo artists like Mettie go through from a purely logical standpoint proves already to us that tattoos are art. The hours of conceptualising and sketching to create a tattoo as well as the task of steadily executing one is profound. Changing the outdated narrative of tattoos not being labeled as art starts with accepting the validity of the things you personally would not engage with yourself. If you do not like the idea of getting your own tattoo that does not mean someone else should refrain from it too and this goes both ways. Allowing each other opposing ideas and opinions that can challenge our own, is the essence of what keeps our society interesting and unique.

We see art all around us in many different forms, whether we realise it or not. To exclude tattoos from the genre of art would be grossly ignorant.

Mettie’s own scope switched after getting his first tattoo, he soon came to the realisation of how amazing body-art was. From then on, he was hooked.

Mettie started his career in 2018 as a graphic designer for Tomb Tattoos, working for Nick Mudskipper in the City of Cape Town. “I just got so amped and hooked on it, that I tried to get in there as hard as I could.” After great commitment and hard work he earned his first set of needles. Mettie began doing hand-poked tattoos as his start and finally was offered to work at Tomb Tattoos with his new found skills as a tattoo artist, going on to pick up a tattoo machine three weeks later. It’s safe to say the rest is history. Mettie then began his 1 year internship where all kinds of obscure and interesting tattoos were both given and received. One of the craziest tattoos Mettie says he has given so far was to a client who got a giant “A” tattooed on her back to match the one her partner had on his stomach so that when they cuddled the letters could touch. Romance truly is not dead.

Mettie has come a long way since his first day on the job. In 2018 during a renowned Tattoo Convention 30 of the world’s best tattoo artists stumbled into the studio Mettie was working at to watch him shake like a leaf in the wind while giving a nervous client one of his first tattoos. If only they could see him now! Mettie’s vision for himself as an artist and the Slow Life Tattoo Studio is to curate his space into a “Crazy, tiny little tat-shack temple with surfboards everywhere.” With the opportunity to one day travel across the world tattooing as many people as possible.

Whatever happens to the art world, art will go on regardless. As for obscurity, it looms just over the horizon beckoning us all. Why worry. ~ Michael Craig-Martin

Drawing inspiration from the likes of renowned and celebrated artists such as Tanner Ramsey, Austin Maples and OR Kantor, Mettie has created a truly spectacular style of his own with a distinguishable technique of confidence and comfortability behind each of his tattoos.The Slow Life Tattoo Studio is one of few situated around the Southern Peninsula. Open from Wednesday to Saturday from 10:30 AM to 04:30 PM, however private bookings outside of these times are available too. The studio standard cost is at R700, making Mettie’s prices on par with the city average.

A true legend in the making, there are no doubts that Mettie and his Slow Life Tattoo studio will continue to inspire in its field. As well as carry on being the hub of community that it already is, where people come to connect, get tattoos and enjoy the slow life.

"After 3 years wrapped up in cotton wool and stored in a cool dry place…
Nicholas Trethowan 0
CommunityCultureInspirationLifestyle
Jun 16, 2022