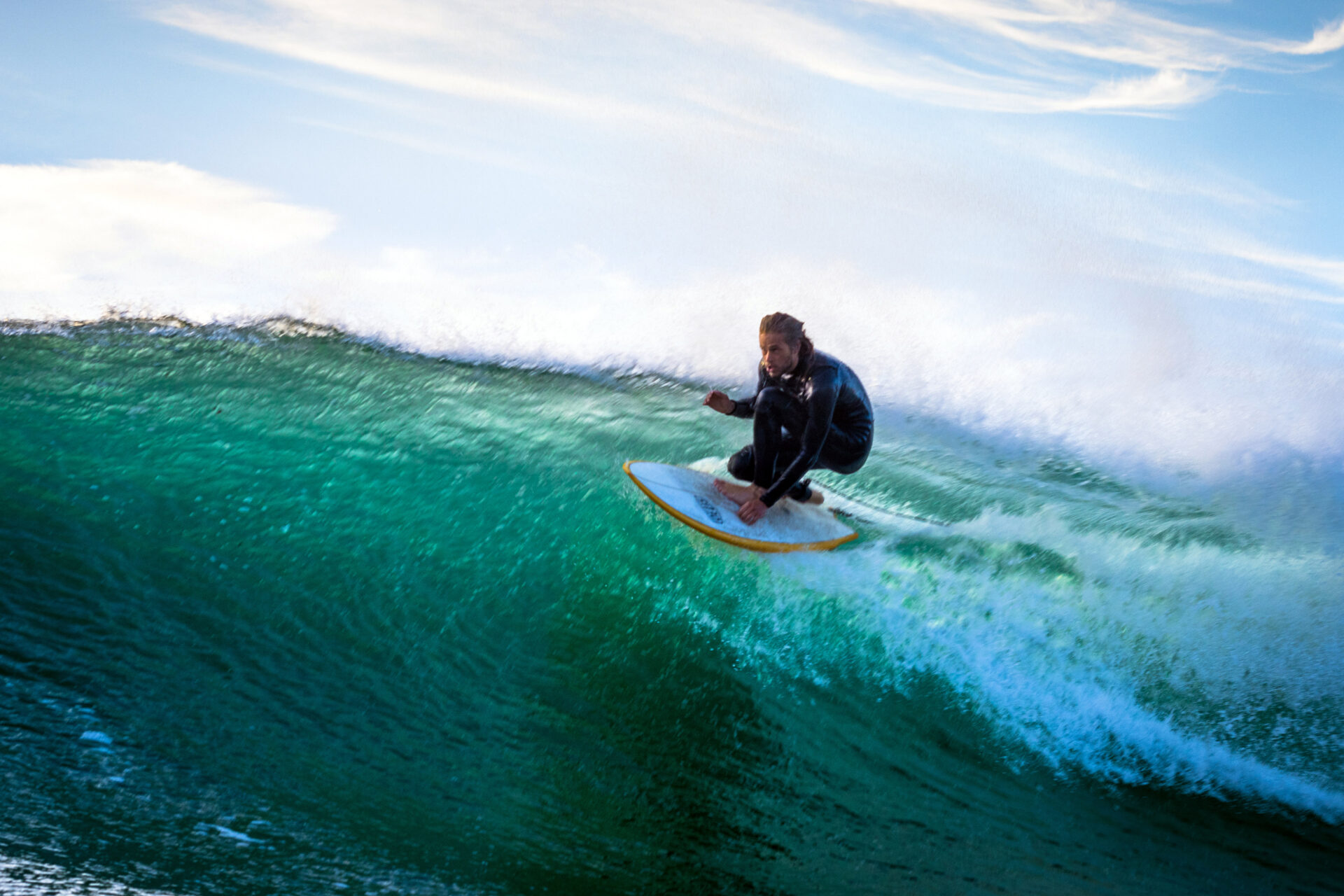 From surfing and art to music and graphic design, he approaches each element with a certain finesse, agile and soulful yet clinical and precise.

Rhythm, speed, and control seem to be indoctrinated into Jordy Talbot’s creative talents, making for excellent viewing. From surfing and art to music and graphic design, he approaches each element with a certain finesse, agile and soulful yet clinical and precise. As a surfer, he negotiates waves smoothly and poetically. Carving intricate and alternative lines that are reminiscent of Michael February’s finesse and mastery. It all looks second nature to him; the high lines, barrels, and steep take-offs appear effortless; you could watch him serenade the waves all day.

As a kid, art was the chief creative outlet for Jordy and surfing was just a bonus; drumming came later than either. ‘I’ve been an artist since I was young. I’ve still got some old sketchbooks of my old drawings and often refer to them for inspiration.’ It was his father who got him surfing and helped him progress to big waves. After getting hit by a board in Kommetjie as a youngster, it wasn’t easy to get him back in the water: ‘I stopped for quite a while, and when I reached grade seven and eight, I started getting back into it.’ After that, the addiction began and, as he got older, the boards got shorter and the waves bigger, whilst his style grew more fluid with the ocean. ‘Grade 10 was the year I surfed every single day. If I didn’t surf for one day, I would make it up with having two surfs the next day.’

Free surfing has always been Jordy’s style. Having never dabbled in surf comps, his only taste of competitive surfing was in his school days, but this was more a ploy to get out of class than to get the competitive juices going. ‘It was more to have a bit of fun on the beach’, he remembers. For him, surfing was an outlet for freedom and joy, ‘It’s a sense of escape. It’s a sense of release. You leave the real world and go there for a few hours. Escape into your world.’ You can see all this in his style, drawing beautiful lines up and down the waves. What’s more, through sticking to these roots and surfing this way, he ended up being picked up by the gold-plated Deus team, bucking the trend of top surfers only getting a sponsorship deal through proving themselves on the gruelling junior circuit.

What catalysed Jody’s free-flowing style was his transition from a thruster to a fish. It wasn’t intentional, rather a blessing in disguise. ‘All my shortboards were broken and were going to get waterlogged if I surfed them. So, I borrowed a fish from a friend.’ Once, he felt the speed and movement of the fish the rest was history. ‘After that, I got my first performance fish from Anton Butler [Ferral] and I fell in love with it.’ From here, Deus entered Jordy’s peripheral. ‘Deus came into the picture when I started surfing fishes’, he explains. Deus is no ordinary surf sponsor – riders are handpicked not only on their surfing prowess but also their ethos, flair, and character. ‘It was like a demo day to like try out the rider’, he recalls, ‘they said we need you to surf. So, we are going to film you and you’re going to be in your board shorts.’ After looking at Llandudno, he redirected Deus’s heavy hitters to Sandy Bay and was rewarded with hollow, clean sandbanks. ‘First wave, I got a barrel in front of everyone. I was just doing my thing. There was no trying to prove anything.’ Even in the glacial waters of Cape Town, surfing in boardies, he was able to keep calm under pressure, with the trademark composure which lies behind his synchronised style of surfing.

His father has been an encouragement throughout, acting as a guinea pig when Jordy entered the world of big wave surfing at seventeen, testing the spots around the peninsula and reporting back to Jordy. His first test came at the Crayfish Factory. ‘Dad came back to me after surfing it and said, it’s super doable. You should come out and do it.’ After getting the green light, they waited for the swell to arrive; it entered the coastline in the form of 8 to 10 ft waves. Having limited gear for the occasion, Jordy took out a 5’10 and managed to glide into an eight-foot slab. From that moment he was mesmerised, ecstatic and wanting more. ‘After surfing Crayfish Factory, we visited Pierre in Scarborough to purchase a big wave board. My first big wave board was a 7’3, a bit of a pocket gun.’ Soon he was chasing local swells at Outer Kom, Sunsets and back at the Crayfish factory. ‘From there, I just started scaling up and up and eventually got a second-hand 8’3 from DVG that I still surf today’. Even though the board has snapped three times under his feet, he has no thought of letting it go.

Even in the glacial waters of Cape Town, surfing in boardies, he was able to keep calm under pressure, with the trademark composure which lies behind his synchronised style of surfing.

Then there are his musical abilities. Being the son and grandson of drummers, it was only right he took to the sticks. ‘We would have drum circles at home or go to the beach or whatnot. And from that, I took to the Kahan, which was a little bit more of a refined acoustic drum. So, you can get more intricate sounds from it.’ In collaboration with his brother Jamie, they formed the impressive indie-rock outfit Valley Road. Created in the hills of Hout Bay, the exciting duo have resided in the Garden Route playing gigs up and down the coast. He is also a member of The Goodrolls, an exciting surf rock band from Wilderness you can catch live most Sunday nights at the local Faerie Knowe Backpackers. Whether it’s surfing, art, or music, Jordy is always looking for alternative rhythms, chasing the intricacies that come his way.

From that moment he was mesmerised, ecstatic and wanting more.

Midway through the year, Phrases found himself trapped between the Covid-regulation borders of Cape Town…
Freddie Hiney 0
ArtPerformance Art
Nov 24, 2021

This is the versatile formula of Hartleyvale, a group of jazz-cats not sticking to any…
Freddie Hiney 0
MusicPerformance Art
Nov 17, 2021

He has had to show resilience, persistence, and flair to break through the ever-unforgiving industry;…
Freddie Hiney 0