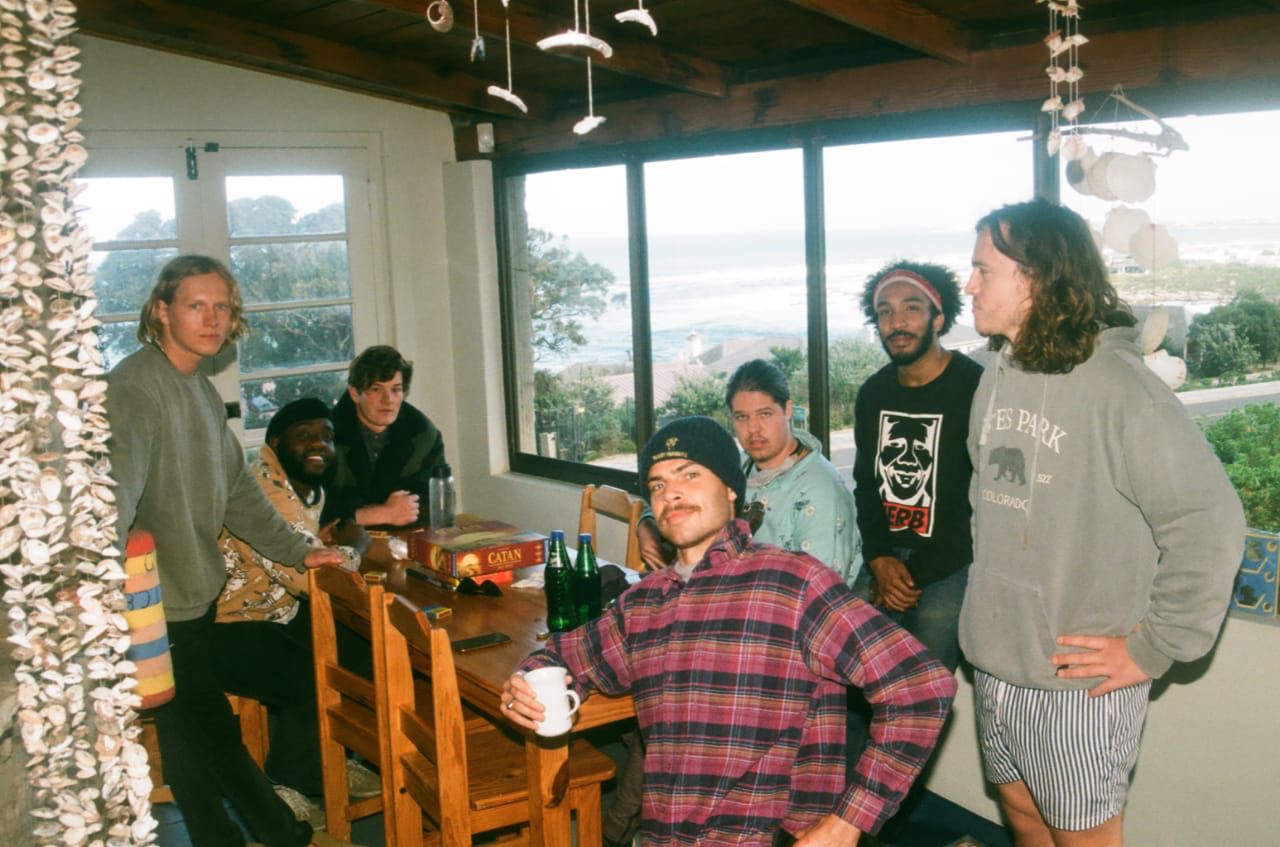 By Christian StainesNov 12, 2021No Comments

The boys from Dank Neighbourhood are here to throw away whatever you’ve come to expect from a musical troop.

Allow me to introduce to you, a crew like no other you’ll find in Cape Town. A crew that covers such a wide range of sounds and genres that you feel refreshed having listened to something so different. Yeah, it’s great to see the latest indie-rock bands kick it off at the main stage, but when last did you see 12 guys seamlessly blend hip-hop, funk, lofi and d&b? The boys from Dank Neighbourhood are here to throw away whatever you’ve come to expect from a musical troop.

Starting way back in 2018, Dank Neighbourhood only really began releasing their music just after last years lockdown. What started off at some drunken freestyles in the basement of a Stellies rez has grown in not only sound but also stature. All of them have been dabbling in music since a young age but decided that it was time they pursued this passion beyond a hobby. Now for some short introductions that will give you some idea about how this mob operates:

3. Paul Tweisye (25) – AKA Plascon Dog AKA Bag Man the Third (rapper) – “Biggie Smalls impersonator. He’s the creative juice and the glue that holds everything together.”

4. Marcel van der Veen (24) – AKA Zwoog (producer/noise wizard) – The man behind the heavier beats. Something sinister.

5. Evan Williams (27) – AKA Uncle Evs (vocalist and rapper) – He’s been around since the early days and features a lot in the first album.

6. Josh du Plessis (26) – AKA Young JD The Easy Tiger (rapper) – “Coolmanslickvibe, Cool cat tiger boy. I am a rapper and I do a lot of the admin behind the scenes.” (The social media guy).

8. Ryno Smit (22) – AKA Courtsyde (producer + beat farmer) – “Known as the Lofi Boi.” You might have seen him featured once or twice on The CCC.

10. Nicolas Stratos de Jager (25) – AKA Stratosfear (vocals, hooks, sound FX) – The guy just looking to stir the pot and create a disturbance in the force. “I try to keep it edgy. Is it allowed? Is it not allowed?”

12. Nate Van Wyk – “An OG member who hasn’t been around much recently but is thoroughly missed by the group.” Lost to the hills of Durban.

The entirety of ‘Anthropology’ was written and recorded over a single weekend within the confines of a four-person cottage in Betty’s Bay.

It’s not easy getting four musicians together to jam, now try 12. Of all things, a pandemic is what united them and pushed them to produce their first album. The entirety of ‘Anthropology’ was written and recorded over a single weekend within the confines of a four-person cottage in Betty’s Bay. Shortly after the initial lockdown, Ryno hit up the Whatsapp group to try and get everyone in the same place. “It was like assembling the Avengers. It took like five movies but it finally happened.”

It’s in this album that you can find their most popular song to date – ‘Fifa22’. Subtly named so as to sneak its way onto the FIFA 22 Soundtrack. No such luck yet but they plan on renaming it until EA has no other choice but to include it. And so they should, this track has got all the energy and flow you’d need for shooting at goal or enticing mosh pits during a live show. Go give it a listen now and feel for yourself. Click here.

Dank Neighbourhood weren’t too sure how to transform their bedroom sessions into a live act at first, but when the opportunity arose they couldn’t say no. They managed to secure a set at Trenchtown and fucking killed it: Moshpits, crowd surfing and many a broken bottle. “We altered our songs a little bit for this live performance, just so it was more inclusive for the guys not directly involved in certain songs. We had more people coming in on the hooks, people ad-libing and backing up the verses. But in the build-up to that event, we really got to know our music a lot better. Some of us finally learnt our lines and we really just learnt how to put on a live performance with so many people on stage at once.”

“Keep it consistent. Keep it rolling out.” This is the attitude Dank Neighbourhood take when it comes to releasing their music. On the first Friday of every month, you can catch them dropping a new single with different guys on each track. Usually, a few of them meet up at a time to make music together. It would be madness having 12 people together all at once trying to make one song. So three or four of them would get together and record some lyrics/vocals over one of the beats the other guys had made. Then they mix and match for each song so that it’s always kept fresh. “Not every beat speaks to someone.” You learn what beats you prefer to sing over and what the other guys are able to hit as well.”

Their most recent singles, ‘Tokyo Drift’, ‘Dream Slow’ and ‘Come Clean’, each bring something new to the table. That’s the beauty of having so many people creating each song; their influences, style and skills can be matched in a variety of different ways until they work. “Not every song is for everyone, but there is a song for everyone.” This rule applies whether they’re making the music or you’re listening to it. You’ll always find something you like.

“There are no limits on what kinds of music we want to make. We could make a rave track with ambient noises if wanted to.”

You’ll find Dank Neighbourhood performing live at Beerhouse in Tygerberg on the 27th of November. Tickets are available through this link.

Keep your eyes on this squad.

You’ll find Dank Neighbourhood performing live at Beerhouse in Tygerberg on the 27th of November. Get your tickets now!

Midway through the year, Phrases found himself trapped between the Covid-regulation borders of Cape Town…
Freddie Hiney 0
MusicPerformance Art
Nov 17, 2021

He has had to show resilience, persistence, and flair to break through the ever-unforgiving industry;…
Freddie Hiney 0
CollaborationFashionMusic
Oct 19, 2021