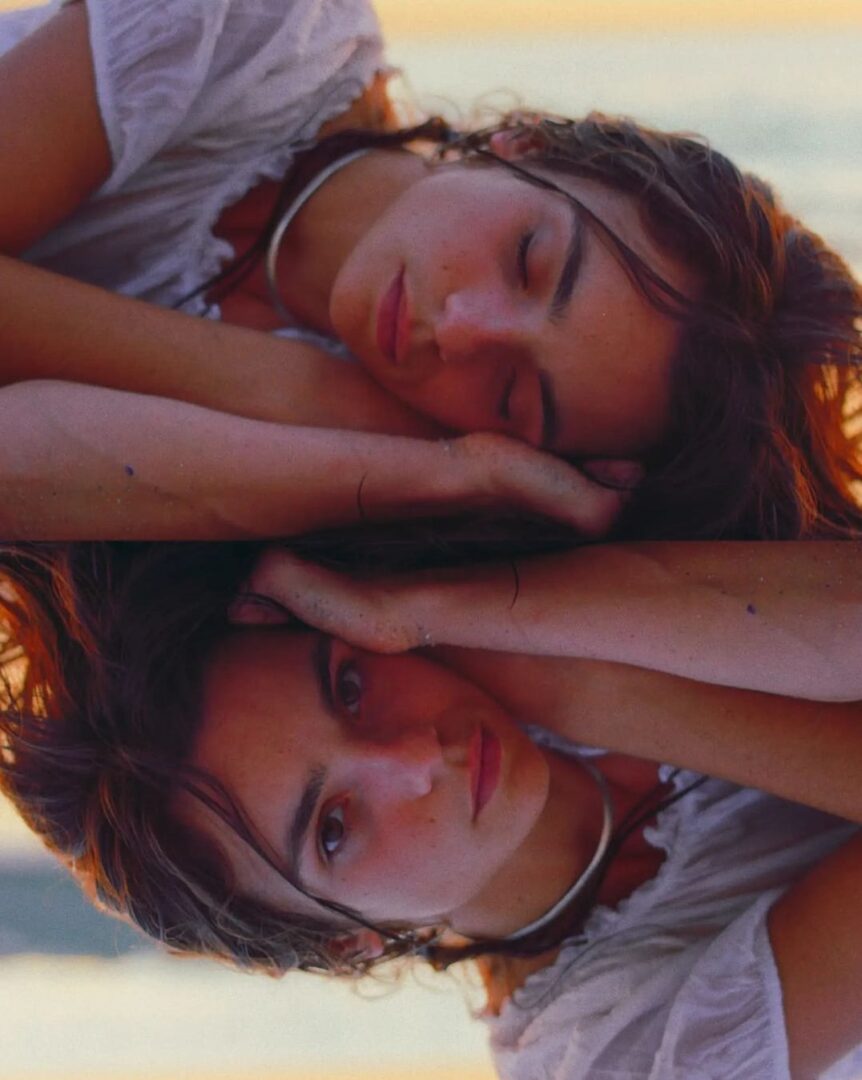 By Christian StainesSep 1, 2021No Comments

“In an uncertain time, two women must confront the past as they attempt to prepare for the world to come.”

‘MODERNA’ follows the shared yet discrepant experiences of Julia and Anna as they attempt to resolve their broken relationship. The short film blends their thoughts and memories of each other into one indistinct narrative where past and present are combined. Julia (Maya Boraine) and Anna (Marie Cavanna) play “an emotional tug-of-war” with each other and with the viewer. No doubt most of us have felt both sides of a breakup and can resonate with each character’s point of view. One wishing to regain their lost love, the other pushing for change.

In this article, I sit down with Alex Andipatin, Maya Boraine and Marie Cavanna to discuss their beliefs and intentions regarding ‘MODERNA’. A key aspect of this short film, which I discussed in my earlier article on Alex himself, is that it aims to place autonomy back into the hands of the viewer. So often are we told the definite and unmistakable meaning behind a film that we forget to think critically about what we have just watched. Relationships are one of the most subjective and personal experiences felt by an individual, hence this film aims to suggest its meaning rather than declare it. “I think that a lot of the script, especially the ending, is not set in stone. It’s very open to interpretation and I think that anyone that has gone through these sorts of troubles in their relationship might see it in a different way depending on their own viewpoint.”

This idea has been slowly circulating around Alex’s head since high school when he first started listening to a band named Bloc Party. One of their albums, Silent Alarm, includes the song ‘This Modern Love’ which first sparked Alex’s interest in creating a short film centred around what this song meant to him. “I really connected with the realness and melancholy sweetness of all the lyrics and their musings on love and relationships.”

So why call it ‘MODERNA’?

“So really, the film is about modern love. I actually came up with the name a long time before I knew about the vaccines and stuff way back in high school. Also, I would say it’s ‘Modern-a’ not ‘Mo-dehrn-a’. I just wanted to respect the young me for coming up with this idea and to keep the name. Mainly I just like the way it looks and I like the way it sounds and what I know it to represent.”

“It’s very open to interpretation and I think that anyone that has gone through these sorts of troubles in their relationship might see it in a different way depending on their own viewpoint.”

At the start of the film, we hear a despondent Anna (Marie) attempt to reconnect with Julia (Maya) via phone call; sadly she is greeted by a cheerful answering machine. Immediately we begin to grasp the dynamic present in their relationship and this offers us a lens to view the rest of the film through. “Anna was trying to reach out and she almost felt embarrassed by doing that. At the end, she says: ‘Okay, I’m gonna go, bye.’ And for me, that is just quite indicative of a broken relationship. Where one person is just okay to move on and is at peace, and the other is kind of just grasping at something that is probably not there.”

The team agrees that a key theme throughout lies in the imbalance between each character. It is kind of like an asymmetrical yin and yang of light and dark. Julia being the more light and carefree individual and Anna slipping into a dark depression from her past traumas. Their relationship has been slowly drifting in opposite directions due to this fact. “I think that Maya’s character is a character at peace, and Marie’s character is a character at war. Maya’s character wants Marie to feel at peace, that is her ultimate goal. But obviously, in any relationship, there is only so much you can stand before you need to walk away.”

The film has a handful of strategically placed and connected symbols throughout which relay its’ tone and implications. An important scene, and arguably the film’s climax, is Anna’s metaphorical baptism. “There’s a lot of biblical imagery, and that’s not because I am religious or anything, I just think that that kind of imagery stirs up a strong feeling in the viewer. So it’s not like she is actually being baptized, it’s more like she is being born again and is willing to start the relationship anew.” Whether they do is part of the film’s open ending and is dependent on whichever character you resonate more with.

“Overall I think I’m more of an optimist so when the film ends with them standing together, and Marie has been baptized, they’re ready to start again.” Alex favours the side of a lovers reunion but it could also be argued that this moment is lived out only in a dream and that the real ending comes with Anna’s emotional breakdown on the beach. This is where the editing in post-production comes to the fore. By slightly altering the light and sound present in a few of the scenes, the viewer is able to discern their relation to one another:

“The parts that we shot in low-shutter speed are meant to be memories, and my thinking there was that often how you remember things is not actually how they were. You might look back on them fondly or you might attach negative connotations to them and they become a spoiled memory. So what we tried to do there was make it a bit more hazy, almost like a dream. And even with the sound design, we tried to make it sound a bit like you’re underwater. And that also plays into the scene where Anna is being baptized.”

When you look back over the timeline of a relationship, memories are often blurred by one’s present emotions. Once happy memories might slide into painful recollections. ‘MODERNA’ plays with this notion by blending past and present to create an unsettling exchange of emotions. Anna is tormented by her past trauma’s and struggles to cope in her new relationship, while Julia is willing to give her the chance to heal and to grow. Alex explains it like this: “It’s quite personal for me because a lot of it is similar to stuff I have personally been through in relationships; how I felt and how it seemed like the other person was feeling. That kind of disconnect where you can’t quite reach a point where both of you will be happy.”

“It’s quite personal for me because a lot of it is similar to stuff I have personally been through in relationships; how I felt and how it seemed like the other person was feeling. That kind of disconnect where you can’t quite reach a point where both of you will be happy.”

The script of the film comes in the form of a personal dialogue between the two characters. They are addressing each other but again, their disconnect in the relationship leads us to believe that their words land on deaf ears. Marie believes this dialogue takes place solely within her character’s head as a way of coping with the broken relationship: “I think that conflict often resolves in personal dialogue and that when you start acknowledging that you are going through something you have that dialogue where it’s like two people talking inside of your head. One might say ‘oh something is off’ and the other might say ‘no, it’s fine.’ So this internal dialogue kind of reflects the process of fighting between two emotions.”

Maya adds to this by saying: “And it is also representative of the two perspectives of the character. I mean just for me, my experience of playing my character was quite different to Marie’s experience because she had to engage with a lot more emotional scenes, whereas my character was quite light. And where the serious tone came from Marie’s character whereas my character was a bit more happy-go-lucky, and you can even hear that in the upbeat answering machine. She’s the one that is ready to move on, a bit like ‘follow me and we can leave your stuff behind. We can grow together.’ While Marie’s character is the one stuck in this turmoil.”

Whenever a relationship ends, both individuals are now left with all this excess information about someone with whom they no longer have contact. Information you may try to hold on to or try to forget, but ultimately it all seems to fade into obscurity. “When you are going through a period like that, you kind of question your own self-worth; you just feel like you’re no good to anyone. It’s not true obviously, but that is just how it feels at that moment. And the only thing that’s actually going to help is time.”

Whether you’re already deep within the creative industry, or just starting out, Alex leaves us with this token of advice for all collaborative projects:

“It’s important that there be at least one person who knows exactly what is going on but at the same time, with any group project, everyone has something they can add. The most important thing is just to make sure that everyone who is a part of the process actually believes in the work. I think that if everyone is as involved as possible then things work at their best. That’s why I share documents with everyone and try to break it down as much as possible and if they have a question they can raise it before we even begin shooting.”

So what can you expect next from Team Eden? The highly anticipated ‘Cotton Candy 3’ is due to be released before the year is out. If you haven’t already then I strongly advise you to go watch the first two instalments in the ‘Cotton Candy’ trilogy.

Thank you to Alex and his fantastic team for creating this true gem.

“I think that if you go back and watch the film again, each time you’ll probably take away something new.”